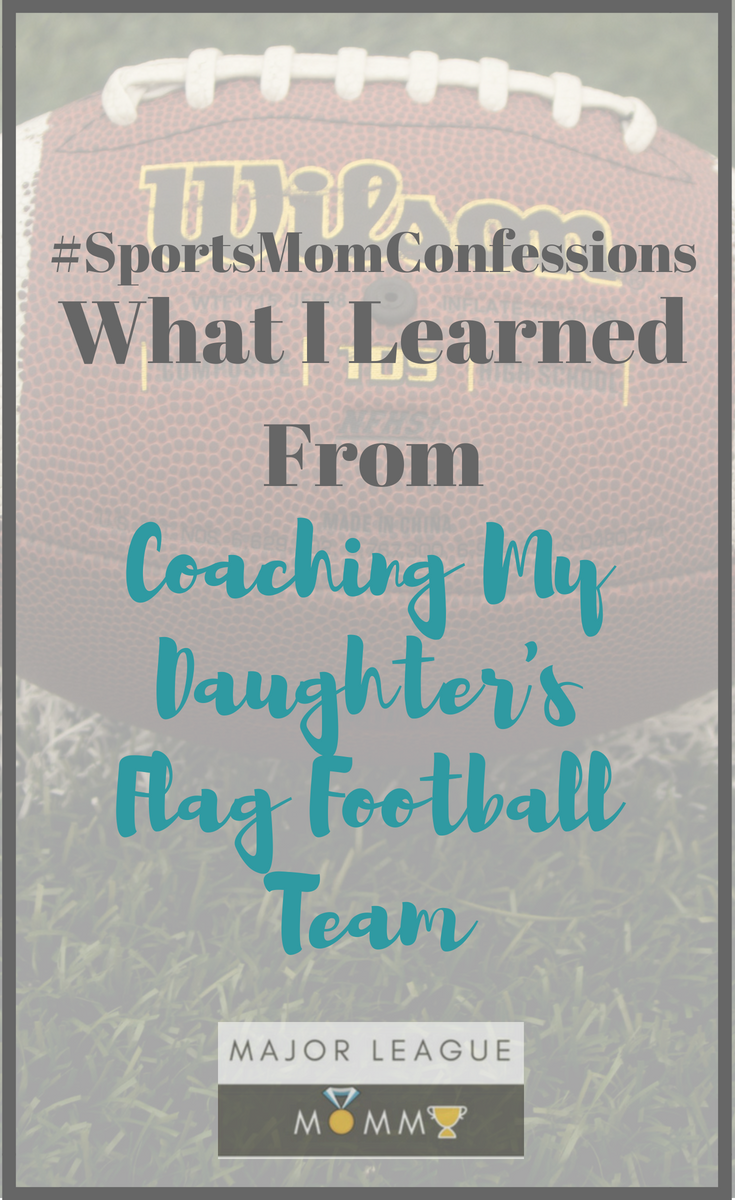 It is officially #SportsMomConfessions time, and this confession is related to my experience as a flag football coach for my then Kindergartner’s team. There were some fun moments, there were some rough moments . . . but it was a great experience nonetheless. Here is What I Learned From Coaching My Daughter’s Flag Football Team. 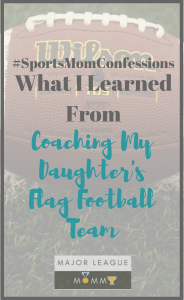 My #SportsMomConfessions are meant to help other Mom’s navigate the process of becoming, and participating as, a Sports Mom. There’s a lot that goes into it, but it can be very rewarding. Today’s confession is about what I learned from coaching my daughter’s flag football team.

First things first, let me just say… I played Powder Puff football in high school my Junior and Senior year, and I absolutely loved it. Other than that, I wasn’t a very seasoned football player, or coach,  for that matter. I don’t watch football games, and I know bare minimums about the sport. Nonetheless, when they sent out the email searching for football coaches for her team, I was one of the first to respond. Typical.

Luckily (so I thought), I had a co-coach that was actually a high school football coach. Unfortunately, he hardly coached the entire season, only showing up for 2 of the games/practices. So, I was pretty much left alone to figure things out. Go figure.

The entire experience taught me a few things about myself, about children, and about life itself.

Getting those kids to actually follow the rules I so clearly, and repeatedly, laid out for them proved to be quite a challenge. The most difficult rule to follow seemed to be, “No tackling. Just pull the flag.” They also liked to pretend they had mouth guards in (when they clearly left it at home) just so they could still join in on the field. Super dangerous. And don’t even get me started on calling the plays… What plays?

I do actually have some patience (somewhere around here)

We had kids randomly get emotional, and totally freak out. We had kids that just wanted to do their own thing entirely. We had kids get injured in the middle of a game. We had kids not getting along with one another. As a coach of this youth Flag Football team, I had to wear many hats. Therapist, Nurse, Mom, Coach, Team Captain. I was a little bit of everything. It could be a bit overwhelming. . . and even downright annoying. But I realized that I was actually quite patient throughout it all.

Omg. When the weather turned chilly, it REALLLLLY got chilly. Some days it seemed unbearable, even with my winter gear on. I would have to run around with the kids just so I wouldn’t freeze to death. Outdoor sports are cool and all, but boyyyy… when it is cold outside, I’d just rather not be outdoors teaching kids how to not kill each other while pulling a flag. I was so jealous of the parents sitting in their little lawn chairs bundled up in a blanket sipping a nice hot drink watching us turn into popsicles.

This was a great opportunity to bond with my child

While coaching my daughter’s team, I was able to spend more time with my daughter outside of our normal setting. She got to see another side of Mommy that allowed her to see that I am more than just a Mom. We were able to sit and talk about football stuff over dinner. I felt like we grew even closer during the season. It was really nice.

This too shall pass…

Throughout the entire season, I was looking forward to the end. I was ready to just go back to my normal coach-free lifestyle. Well, it all went by so fast. And I realized that is wasn’t so bad after all. It was more rewarding than anything else. I later decided to coach (one of my absolute favorite sports) gymnastics. Yep. I caught the coaching bug.

Enjoyed this post? Don’t forget to join in the conversation on our Facebook! We would love for you to share your thoughts on coaching your child’s sports team . See you there. 🙂

Poor nutrition is the cause of nearly half of the

It’s a celebration! 🤪 Happy Birthday to my fi

Did you catch our latest upload? 👀 #ad In today