How to Talk to Your Kids About Racism, Police Brutality and Protests

I’m sure we have all seen it in the news . . . the protests, the anger, the clips of police brutality. These are harsh realities that have been yet again been pushed to the forefront following yet another murder of a black man at the hands of police. Unfortunately, situations like this are nothing new – not even uncommon. However, with cities and the internet erupting with protests, violence, and blatant expressions of anger, this is an experience that we cannot necessarily shield our children from. And as a matter of fact, these are real-life experiences that are children should be educated on. 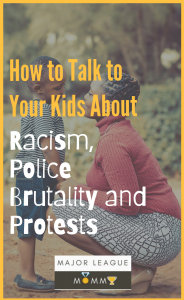 As I drove to pick up an order from Target earlier today, we were met by a stream of protestors standing along the road chanting and holding signs. This prompted my daughters (ages 5 and 8) to ask me questions about what was going on. For the past week or so, I hadn’t been having conversations about this matter in front of the kids. I didn’t want to alarm them (especially when we have such a great relationship with our local police department.) But they have the right to know what is really going on in this world. Not everything is a perfect “and they lived happily ever after” story – although we all wish it could be. I know that I cannot protect them from all the harsh realities of life, but I can do my part to help prepare them for it. So, I explained . . .

I told them that this crowd of people was protesting – they are telling people that they are angry and want things to change. My 8-year-old then asked me what they were angry about . . . I paused for a moment before answering. How do I best explain this to her without turning her against the police or white people? 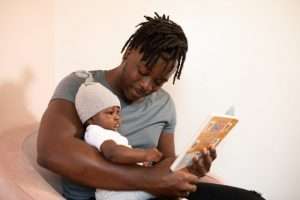 I simply replied, “They are angry because a police officer killed a black man for no good reason.” She wanted to know what exactly the officer’s reason was for killing him. I told her, “Well, that’s why people are protesting . . . we believe he killed him because he didn’t like that he was black.” She was a bit shocked at my response, and of course, it led to her wanting to know more – she wondered if maybe it was just a mistake and not because he was black. (Oh, the innocence of children- gotta love it) Well, that is always a possibility. However, I explained to her that things like this have happened so many times for very many years and all the evidence points to the fact that the officers were just racist, and didn’t care about the lives that they took.

My 5-year-old had moved on from the conversation long before this point – which I was totally okay with, to be honest. But for older children, when they see things like this they want an explanation – and a good one at that. 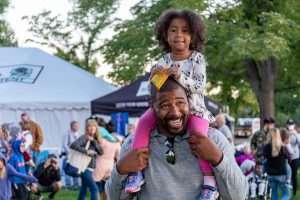 So, today this post isn’t about how I feel parents should be handling this situation. I want to know, as a black Mom, a parent of two black children, and a wife to a black Husband, how do you talk to your kids about racism, police brutality, and protests?

And one thing I do know is this . . . we have a great responsibility as parents. We are raising a new generation of children and we have the opportunity to teach them a better way. They do not have to live the same story that people have been living for hundreds and hundreds of years. We have the power to change that, but we have to do our part. Pretending like these things do not exist, are only doing us ALL a disservice.

‼️ COMING SOON‼️ My daughters have been

The girls competed in their first ever karate tour

My daughter is enjoying her time at @challengerhq

⭐️ IN STORES NOW ⭐️ My daughter is super

{ad} Have you ordered your @airborne_us Elderberry

{ad} My 6-year-old is keeping her brain active thi

Had to bring our @buddyphones along for the ride.

We kicked off my Husband’s birthday celebration

{ad} We had a blast @jurassicquest today. 🤩 And

{ad} My daughter has been obsessed with LOL dolls

Did you catch our YouTube video on my 3️⃣ Fave